Perry Rhodan wakes up aboard the Ras Tschubai. After the spaceship had to go through the Chaotemporal Tidal Field, the crew of 17,000 people was put on suspended animation and 493 years have elapsed. The year is now 2045 NGT and the spaceship is in the proximity of the Milky Way. Rhodan is the only one awake and immediately notices that several things are wrong. The on board computer, Anansi, is not responding to his requests, and he finds a mysterious and organic blue suitcase in the control room. He soon meets with the owner of the strange object: a woman called Zemina Paath, She's not from the Milky Way and tells Rhodan she came across the Ras Tschubai on her own spaceship, and decided to come on board when she noticed the spaceship was severely damaged. She tells Rhodan the suitcase is her Paau but without saying anything more about it.

Zemina Paath's answers to Rhodan's questions are elusive. She admits to taking out his cell activator from his shoulder in order to study it, and then she returned it, but she won't explain why. Rhodan is able to gather that a race called the Cairans are running the Milky Way, and they are famous for being peace makers. To Rhodan's surprise, Paath also tells him that the Earth is a myth and never existed. She also mentions that Reginald Bull is alive and in charge of the Central Galactic Bastion, in the Ephelega system.

Paath invites Rhodan on her spaceship, the Nashadaan, a 300 meter long cylinder. She tells hims that she covered the Ras Tschubai in a protective field so that the Cairans could not detect it, because if they did, they would destroy it. Rhodan asks her why the Cairans would do such a thing but she doesn't know.

Rhodan wakes up his closer confidantes, Atlan, Pucky, Sichu, his wife, and more crew members. They are all highly suspicious of Zemina Paath, especially since even Pucky cannot read her mind. Rhodan decides to head into the Milky Way and to try and find Reginald Bull.

Two alien spaceships materialize in the vicinity of the Ras Tschubai and start scanning it. Zemina Paath tells Rhodan they are Cairan probes, and that the Cairans have been trying to find Rhodan and his spaceship for centuries. Before the spaceship can escape, three Cairan spaceships materialize, shaped as elliptical spheres, 2800 meters wide. Atlan names these space ships "eye ships" because of their bright, white, and reflective appearance. Rhodan makes contact with the ships and a Cairan appears on the screen. He's humanoid, taller than regular humans, with ochre slitted eyes and two pairs of four finger hands.

The Cairan identifies his ship as the Maidac Odair, protecting the halo of the galaxy on behalf of Halo Consul Aionguma Baldaraise. After a brief exchange, the Cairan ships open fire on the Ras Tschubai as warning shots. Rhodan orders for a retreat.

Back to safety, Anansi tells Rhodan and his crew that she analyzed millions of communications coming from the Milky Way and she identified hundreds of various legends and stories related to the Earth. All of them are vaguely steeped in reality and actual history, but with distorted names and facts. The positronic declares that some time in the past 500 years, some phenomenon altered all the data storages and computers in the Milky Way and uploaded corrupted data instead. That event is named "posicide". Atlan suggests that the posicide might not necessarily be an attack from the outside but possibly a defense against some attack.

Rhodan decides that because cell activators are so easily detected by Cairan probes, he needs to leave the Ras Tschubai, leaving Atlan in control. He will fly away on board the cruiser Bjo Breiskol, with Ferye, his granddaughter, at the helm. Their destination is the Ephelega system, in order to connect with Reginald Bull. Zemina Paath will come along with her ship, the Nashadaan. Meanwhile, Atlan will fly the Ras Tschubai to Culsu, the "iron world", one of the Posbis' dark worlds which will be able to repair the spaceship. Atlan and Rhodan will meet again eight weeks later, on Hellgate, the planet where the two immortals once fought each other when they first met.

In the Ephelega system, Reginald Bull and his assistant, a posbi called Ganud, are receiving a Tefrodian named Caer, and expecting an Akonide named Rheelona Tan Thanor. Reginald Bull is still expecting the Ras Tschubai and Perry Rhodan to appear some day.

Giuna Lingh is a woman scientist working on an Akonide station tasked with setting up a network of transmitters. Her husband was recently arrested by the Cairans and she's trying to find a way to free him. A bomb is detonated on the station and the crew suspects the trading race Barnitians to be behind the sabotage. A Cairan representative is invited on the station to investigate, while the Barnitians send their own emissary, a man called Kondayk-A1, accompanied by his assistant, a human called Cyprian Okri.

Giuna connects with Cyprian and explains to him that she's hoping she can negotiate her way on their spaceship in order to go on the planet where her husband is imprisoned. For payment, she tells Cyprian she has two cell activators. These activators were part of the hundreds that were given away by the Gemeni and they belonged to her parents, now deceased. Like most Gemeni cell activators, they stopped working a while ago, but even disabled cell activators carry great value, so Cyprian is interested.

When Kondayk-A1 comes back into his ship and meets Giuna, he's initially skeptical. She explains to him that her husband insulted and attacked a Cairan, which led to him being taken away and imprisoned. The Barnitian eventually believes the young woman and accepts to give her a ride on his ship, and goes one step further and reveals to her their secret: he and Cyprian Okri are not really traders but members of the Ephelegon, an intelligence service that succeeded the Terran League Service. Giuna is confused because to her, this is all folklore related to the myth of Earth. Their mission is to learn more about the Vital Suppressors, a mysterious technology that the Cairans use on their prisoners to make them submissive. Kondayk-A1 and Okri actually learned about Giuna and came to find her, knowing her quest to free her husband.

The team of three makes their way to the prison planet and, after breaking through the Cairan security, manage to locate Giuna's husband. As the Vital Suppressor is slowly eroding her will, Giuna rescues her husband and they manage to escape right as the Cairan forces are closing in on them.
Nach oben 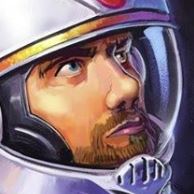 Wow! Big surprise to see you back in line! Thank you for fixing the covers on the site

Good going Cedric! Keep it up. Then in a few years I'll catch up to you and I won't need to do these summaries. :>
Jerry
Nach oben 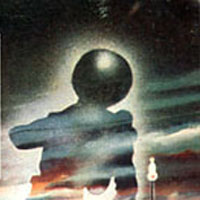