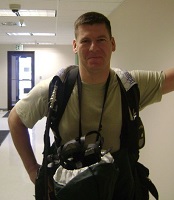 We talk about our heroes from the PR Universe..
but I think we also have a responsibility to keep ourselves as close to our heroes as possible.

Often I ask myself.. "What would Perry Rhodan do in this situation?"

Well one thing he would do is stay in shape no matter what.

Well I been getting back into shape with weights, light runs and ruck marches since March (from a state of fat weakness... but the weak are slow and the slow get dead so...)

But today's workout was especially brutal so I figured I'd post it hopefully to give some ideas to my friends on here.
4th exercise event for the week.

I paired up with a dude who was in surprisingly rock hard shape who wanted to try my program.
So it got real competitive between us:

2 sets of tight arm pull ups
2 sets of wide arm pulls ups (assisted)
3 sets of squats
3 sets of clean and jerks.
3 sets of bent over rows (heavy)
2 sets of legpress (with 450 lbs of weight...except the machine malfunctioned on me after a full set... the "lock" wouldnt engage and I couldnt leave the machine. We tried and tried to engage the lock for several minutes all the while I had to hold all that weight up w/ my legs after my near-failure set. It was a dangerous situation... in the end all the weigths were taken off so I could crawl out from under it) legs shaking with exhaustion.
next
1 set of sit-ups
2 sets of hip adductions
2 sets of hip abductions
2 sets of seated military dumdbell press
2 sets of angled dumbbell press
2 sets of flat dumbbell bench press
3 sets of lateral raises
3 sets of frontal raises
2 sets of weapons handling raises ... an exercise developed by myself.. its basically a variation of frontal raises were u handle weights like you bring up a weapon from the patrol ready,....but with both hands holding weights. Workout Buddy yells "Threat" then you execute with a 10lbs weight in each hand turn head-turn body-raise like a Carbine shoot sequence.
2 sets of weighted calf raises (100 lbs held in hand during the raises so bodyweight plus 100lbs) - Feel the burn!!

I was gonna go slow since i just did a broadly similar workout on Thursday and i like to keep these heavy days 3 days apart.... but the Gym isnt open on Sunday so it had to be today and actually we went thru very quickly.
Maybe 75 minutes.

I spent all afternoon lying on the couch recovering.... could do little else...
Everyday Men who will follow orders to kill you, exercise. Do you?
PS: Entschuldigt bitte mein holpriges Deutsch, Deutschstaemmiger Ami hier.
Nach oben

I often wondered .. how does it work with exercise and cell-activator?

If the Activator maintains the status quo will you ever be able to gain fitness?
Or conversely if you put it on when very fit will you never lose that "wind" and muscles even if u stop exercising?
Everyday Men who will follow orders to kill you, exercise. Do you?
PS: Entschuldigt bitte mein holpriges Deutsch, Deutschstaemmiger Ami hier.
Nach oben

So I don't think ZACs would do anything against doing some fitness and muscles growing.
Nach oben
Antworten
3 Beiträge • Seite 1 von 1